I moved to Guangzhou in 2016, November and this past 2 years have been beyond exciting. Guangzhou is the 4th biggest city in China, the city has an estimated 14 million habitants. My country, Hungary has 10 million people and I come from Tatabanya, a city which is head of the region with its 80,000 habitants. 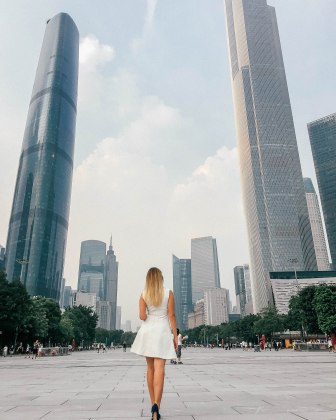 Firstly, I couldn’t even imagine how can a city as big as Guangzhou being managed, but the more I live here, the more it feels like its a country on its own. Living the big city life in China is very different than New York or any European city. Here, being a foreigner is still something special, people will notice you,

During these 2 years I have had explored this city pretty well but I am sure there are many places where I still didn’t go. Let me summarize my opinion based on my experiences, what are the pros and cons of living in Guangzhou as a foreigner.

+ Being a foreigner IN CHINA,

people are genuinely more interested in you. I love when little children look at me being surprised, because I look different than 99% of the population here and I always wave to them and smile at them, and when they get excited about that, it’s really heartwarming. In addition, as I experienced people will try their best to serve you with great attention and care, which is quite pleasant too.

it also means that people might just take a picture of you, straight into your face without asking you, or just start taking videos of you. It also means, that when you are standing alone in the metro (and not looking at your phone), you will feel not belonging, isolated even because people openly stare at you. You can pretty much never forget for even a minute that you are far away from home. Some brave Chinese people (man and woman both) may randomly ask for your phone number or taking a selfie with you, which may feel like fun for the first time, but after 1 year it’s more than annoying.

is pretty easy here. In Guangzhou, I would say 80% of the people don’t speak a word in English and to make it harder, every international hotel or brand has a Chinese name, which is totally different than the English name. I lived in Hong Kong for 2 years before and I never felt the urge to learn Cantonese, but here, I felt forced to learn the language which I am very happy about. When you learn Chinese, you learn much more than another language. Chinese Characters reveal a lot about deep cultural layers in China, I will write a separate blog post about that later.

can be very hard in Guangzhou. Guangzhou is home to the Cantonese language, which is only spoken in this province (80 million people total, including Hong Kong). Most of the people here learn Mandarin Chinese only later when they are adults and their pronunciation has a hard accent. I only learn Mandarin Chinese and it is very easy for me to get along in Beijing or in Wuhan, but in Guangzhou, some people are really not good at it and it can come to a point where my only option is to actually start typing Chinese characters on my phone. It can be very frustrating.

is totally different from what I was used to in Europe. Here, the weather never gets too cold, worse 2 weeks of the year maybe around 10 degrees. European Standard summer here lasts from March until November. I really don’t like winter, so it is very pleasant that it’s never snowing.

is subtropical, which means that during the summer months (mostly from Jun-August) it rains every day or on every second day. The temperate is definitely too hot for my liking in these months and even during the night, it doesn’t freshen up. In the summer months, the temperature often doesn’t drop below 30 degrees even at midnight. Airco is LIFE

are usually until 10 pm. It was really strange at first that at 9.30 pm I can easily start a shopping in the supermarket, in Zara or I can go to do my nails at this time. Moreover, if 10 pm is too early for you, there are 7 Elevens and other small shops in pretty much every street which are open 24/7 and have all basic products such as food, medicine, make up and more.

start much later than in Europe, shops usually open at 10 am. It is hard that I cannot take care of anything before 10 am and the worst is that most offices also work from 10 or even from 10.30 am. It is so late compared to what we are used to and because they start late, they obviously finish late too. Most people work until 7 pm or later, so it feels to me that the whole day is gone already, not much you can do later. I much prefer to start early and finish early.

When I want to get my nails done, go to the hairdresser, watch a movie or order an Uber (it has its Chinese version, called Didi), you never need to worry about booking it in advance or making an appointment. There are so many similar salons nearby and all the places are so big, that you can go anytime you want. I go to a few hairdresser salons and they have over 20 hairdressers, if you are not too specific or hard to satisfy, you can always find any service within minutes. Pretty cool, isn’t it?

It is so easy to order an Uber, because there are so many of them, which means traffic. Traffic in the city is crazy in the rush hours. Online delivery is really big here, most people order their lunch through their app, so the streets are filled with delivery guys  rushing around and crossing through the red lights because there schedule is tight. Also, when it comes to services, there are so many similar style salons and products with similar prices, it is really hard to predict what is good quality and what isn’t.

I heard it many times from foreigners and locals as well, that Guangzhou has become very expensive during the last few years as it has developed rapidly, but still, in international evaluation it is fair to say that it’s still very cheap. Buying clothing, food, products and especially enjoying luxury, it is really affordable. I am a big fan of online shopping for clothing and it’s really easy not to buy anything which costs more than $10. I can stay in the best 5 star hotels for one third of a price compared to European capitals and  10 minutes Uber ride will not cost more than $4.

but if you are a foreigner it may cost you more! Especially, during the first time when I moved here, I always felt that people want to rip me off or force sell me more products and packages that I am not interested in. Most people ask me about this: yes, it is possible to buy good quality copy big brand bags, shoes in China. However, you will not be able to tell the difference between low quality and high quality products in the beginning, so you may end up paying $200 for a Dior bag and it will lose the letter “r” until you get home with it!

Have been there, done that and now

I hope you got to know a bit more about how is life in China’s big city today.

In my next article about China, I will share how come I haven’t touched Chinese Renminbi for nearly half a year

Visiting Kyoto: Geishas and beyond